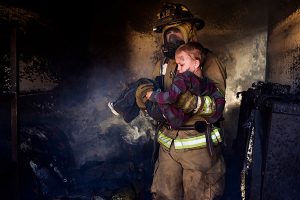 When dealing with small fire incidents at home, it’s critical to understand that attempting to put out a fire on your own can make the situation worse if done incorrectly. The destruction caused by fire does not stop with everything being burned or melted. A building fire is much more than that, and it cannot be repaired by just anyone. Often the fire damage could be dangerous, and it takes an expert to carry out and complete the cleanup and repair process correctly. When it comes to house fires, there are additional damages that can occur, causing serious stress and costing a lot of money.

Fire damage is fairly straightforward. A fire produces extreme heat, which can melt some materials as well as weaken the base. Flames have the ability to disintegrate anything in their path. To slow the spread of a large home fire, firefighters might have smashed windows or cut holes in the roof. After the fire is extinguished, your home might not be as safe as it appears. The floor may appear to be solid, but the intense heat has taken its toll. For relatively small fires, the chemical compounds from a fire extinguisher could also be harmful.

Smoke is the major damage. No one ever thinks about this, but smoke can cause even more harm than flames in a fire. Even when the flames do not spread throughout the property or to individual rooms, the smoke could spread throughout. The smoke can turn your household and valuable items black, but the stench from the smoke is extremely difficult to remove. Even if something appears to be in perfect condition, you may have to let go of it because you cannot remove the smoke smell.

Water will be used to extinguish the fire. It’s great that something as easily accessible as water can put out a fire, but that also indicates that there would be water or flood damage. If your belongings were not damaged by the fire or smoke, they are most likely wet from the water.

If the after-effects are left for a longer length of time, this could become a major issue. It is difficult for things to rot if they are dealt with immediately, but if they are left for even just two days, the water used to put out the flames can end up causing things to mold and rot. This can aggravate the foundation’s weakness and make it more severe.

Following a fire, it is critical to prioritize safety. Before entering your house or going near a fire, make sure it has been inspected. Whether you have experienced a massive fire or a small cooking mistake, you don’t have to panic. Call Five Valleys Restoration and Cleaning to take care of the property and rest assured that your property is in good hands. Contact us today for fire damage cleanup in Hamilton.