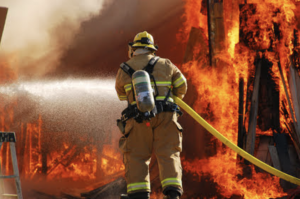 It doesn’t take an expert to explain that house fires are extremely dangerous. What is less commonly discussed, however, are the dangers of a house fire after the fire has been put out. There are actually many serious hazards brought on by a fire that often come up during the fire damage restoration process. Below are four of those hazards and how you can avoid them according to our restoration experts at Five Valleys Restoration in Missoula.

Inhaling smoke and soot can be incredibly destructive for your lungs. Smoke on its own can lead to serious lung issues that can persist for decades after the initial inhalation. Soot inhalation is an even more serious matter. Soot is composed of tiny, microscopic particles of material burnt by the fire. When inhaled, they can cause massive damage to your lungs and throat. Soot can even have carcinogenic properties potentially leading to cancer in those who inhale it. It’s best to simply avoid going back in your home after a fire to avoid inhaling smoke or soot, but if you have to make sure you wear respiratory protection to keep safe.

It should come as no surprise that fires often lead to significant structural damage. This damage is especially dangerous when it isn’t readily apparent. For example, the fire may cause serious damage to your ceiling but in a way that you can’t readily see it. This is dangerous since you can be lulled into a false sense of security thinking that your home is structurally sound when in reality it is just the smallest movement away from collapsing.

Due to the havoc that a fire can wreak in a home, damage to your electrical systems is an important concern. The best way to mitigate this hazard is to turn off your electricity after the fire and have it inspected by a professional once initial damage has been cleaned up. The last thing you want to have to worry about on top of the fire is the danger of being electrocuted.

Many people are surprised to hear that mold damage is a common problem in the fire damage restoration process. That’s because the mold doesn’t come from the fire but from the water used to put it out. Mold usually just causes minor health problems like respiratory symptoms. However, it’s still best to place and have the pros take care of the mold as well.

A house fire is enough danger and drama. Don’t further your troubles by exposing yourself to unnecessary dangers during the restoration process. The best way to avoid this is to simply call the professionals to deal with the fire damage restoration for you. Not only does this allow you to keep safe throughout the restoration process, it also ensures that the job will get done correctly so you don’t have continual issues later on. We at Five Valleys Restoration in Missoula are one such company qualified and experienced in all types of fire damage restoration. Don’t ever hesitate to give us a call for help after a fire.